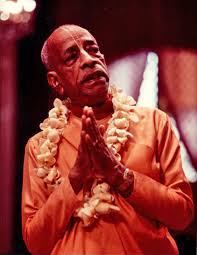 Lord Śrī Caitanya Mahāprabhu explained this mode of devotional service in three stages, and therefore these worshipable Deities were installed in Vṛndāvana by different Gosvāmīs. They are very dear to the Gauḍīya Vaiṣṇavas there, who visit the temples at least once a day. Besides the temples of these three Deities, many other temples have been established in Vṛndāvana, such as the temple of Rādhā-Dāmodara of Jīva Gosvāmī, the temple of Śyāmasundara of Śyāmānanda Gosvāmī, the temple of Gokulānanda of Lokanātha Gosvāmī, and the temple of Rādhā-ramaṇa of Gopāla Bhaṭṭa Gosvāmī. There are seven principal temples over four hundred years old that are the most important of the five thousand temples now existing in Vṛndāvanaooks : Sri Caitanya-caritamrta – 1975 Edition : Cc. Adi-lila : Adi 1: The Spiritual Masters : Adi 1.19 : PURPORT :

There are many Vaiṣṇava families in Bengal whose members, although not actually born brāhmaṇas, act as ācāryas by initiating disciples and offering the sacred thread as enjoined in the Vaiṣṇava tantras. For example, in the families of Ṭhākura Raghunandana Ācārya, Ṭhākura Kṛṣṇadāsa, Navanī Hoḍa and Rasikānanda-deva (a disciple of Śyāmānanda Prabhu), the sacred thread ceremony is performed, as it is for the caste Gosvāmīs, and this system has continued for the past three to four hundred years. Accepting disciples born in brāhmaṇa families, they are bona fide spiritual masters who have the facility to worship the śālagrāma-śilā, which is worshiped with the Deity. As of this writing, śālagrāma-śilā worship has not yet been introduced in our Kṛṣṇa consciousness movement, but soon it will be introduced in all our temples as an essential function of arcana-mārga (Deity worship).

This Kṣīra-curī Gopinātha is situated about five miles away from the Bāleśvara station on the Northeastern Railway, formerly known as the Bengal Māyāpura Railway. This station is situated a few miles away from the famous Kargapura junction station. Sometimes the charge of the temple was given to Śyāmasundara Adhikārī from Gopīvallabhapura, which lies on the border of the district of Medinīpura. Śyāmasundara Adhikārī was a descendant of Rasikānanda Murāri, the chief disciple of Śyāmānanda Gosvāmī.Books : Sri Caitanya-caritamrta – 1975 Edition : Cc. Madhya-lila : Madhya 4: Sri Madhavendra Puri’s Devotional Service : Madhya 4.12 : PURPORT : There is a railway station named Baleśvara, and five miles to the west is the village of Remuṇā. The temple of Kṣīra-corā-gopīnātha still exists in this village, and within the temple the samādhi tomb of Rasikānanda Prabhu, the chief disciple of Śyāmānanda Gosvāmī, can still be found.

One who is actually advanced in spiritual knowledge of Kṛṣṇa is never a śūdra, even though he may have been born in a śūdra family. However, even if a vipra, or brāhmaṇa, is very expert in the six brahminical activities (paṭhana, pāṭhana, yajana, yājana, dāna, pratigraha) and is also well versed in the Vedic hymns, he cannot become a spiritual master unless he is a Vaiṣṇava. But if one is born in the family of caṇḍālas yet is well versed in Kṛṣṇa consciousness, he can become a guru. These are the śāstric injunctions, and strictly following these injunctions, Śrī Caitanya Mahāprabhu, as a gṛhastha named Śrī Viśvambhara, was initiated by a sannyāsī-guru named Īśvara Purī. Similarly, Śrī Nityānanda Prabhu was initiated by Mādhavendra Purī, a sannyāsī. According to others, however, He was initiated by Lakṣmīpati Tīrtha. Advaita Ācārya, although a gṛhastha, was initiated by Mādhavendra Purī, and Śrī Rasikānanda, although born in a brāhmaṇa family, was initiated by Śrī Śyāmānanda Prabhu, who was not born in a caste brāhmaṇa family. There are many instances in which a born brāhmaṇa took initiation from a person who was not born in a brāhmaṇa family. The brahminical symptoms are explained in Śrīmad-Bhāgavatam (7.11.35), wherein it is stated

yasya yal-lakṣaṇaṁ proktaṁpuṁso varṇābhivyañjakamyad anyatrāpi dṛśyetatat tenaiva vinirdiśet
If a person is born in a śūdra family but has all the qualities of a spiritual master, he should be accepted not only as a brāhmaṇa but as a qualified spiritual master also. This is also the instruction of Śrī Caitanya Mahāprabhu. Śrīla Bhaktisiddhānta Sarasvatī Ṭhākura therefore introduced the sacred thread ceremony for all Vaiṣṇavas according to the rules and regulations.
Books : Sri Caitanya-caritamrta – 1975 Edition : Cc. Madhya-lila : Madhya 24: The Sixty-One Explanations of the Atmarama Verse : Madhya 24.330 : PURPORT : samo damas tapah saucam ksantir arjavam eva ca jnanam vijnanam astikyam brahma-karma svabhava-jam :

Unless one is qualified with all these attributes, he cannot be accepted as a brāhmaṇa. It is not a question of simply taking birth in a brāhmaṇa family. In this regard, Śrīla Bhaktisiddhānta Sarasvatī Ṭhākura remarks that Narottama dāsa Ṭhākura and Śyāmānanda Gosvāmī, although not born in brāhmaṇa families, are accepted as bona fide spiritual masters because they were brāhmaṇas by qualification. Personalities like Śrī Gaṅgā-nārāyaṇa, Rāmakṛṣṇa and many others, who were actually born in brāhmaṇa families, accepted Narottama dāsa Ṭhākura and Śyāmānanda Gosvāmī as their spiritual masters.

Sri Syamananda made his appearance at Orissa in the village of Dharenda Bahadurpur. His father’s name was Sri Krishna Mandal and his mother’s name was Sri Durika. Sri Krishna Mandal had many sons and daughters who unfortunately passed away before the birth of this son. For this reason this son was named Dukhiya.
Everyone said that this child would be a very saintly person. The scholars were astounded to see his profound intellect. Within a short period he completed his studies of grammar, poetry and rhetoric. His parents were overjoyed to see his talents and his religious proclivity. After having carefully listened to the glories of Gauranga and Nityananda from devotees, he was able to repeat them to others. When listening to the activities of Gaura-Nitai or those of Radha and Krishna, tears would flow in waves from his eyes. He also devotedly served his parents and they told him to get initiated so that he could fully commit himself to the service of the Lord. Duhkhi agreed and told them that he wished to take diksha from Hriday Chaitanya, the disciple of Gauri Das Pandit. His parents happily gave him permission to go there.
When Duhkhi arrived in Ambika Kalna, he threw himslf at the feet of Hriday Chaitanya, who upon learning his identity, happily gave him Krishna-mantra and named him Krishna Das. Hriday Chaitanya ordered him to go to Vrindavana to study the literatures of the under the tutelage of Srila Jiva Gosvami. Krishna das bowed his head in assent, and on an auspicious day he set out for the holy dhama.
In Vrindavan, Krishna Das studied the Vaishnava scriptures under Sri Jiva Goswami, who was the leading scholar of the sampradaya. Krishna das very carefully began to serve Jiva Gosvami as well as study the literatures of the Gosvamis. Srinivasa Acarya and Narottama dasa Thakura also came to Sri Jiva at this time to study under him. Thus Krishna das had the opportunity to meet them.
Krishna das requested Srila Jiva Gosvami for a special service. Sri Jiva instructed him to sweep the forest grove of Sevakunja everyday. From that day he began to carry out this service with great pleasure. He felt that his life had become successful.
One day, Krishna das was sweeping the Rasa-mandala in Vrindavan, absorbed in ecstatic trance. Suddenly, by Radharani’s transcendental mercy, he found her ankle bracelet lying on the ground. In his excitement, he touched the ankle bracelet to his forehead, where it left a mark. It is known as nupura tilaka.  While in Vrindavan, Krishna das was given the name Shyamananda because he brought great joy to Shyamasundar.
Jiva Goswami sent Srinivas Acharya, Narottama Das Thakur and Shyamananda back to Bengal with the Vaishnava scriptures. But the books were stolen by the dacoit king. There Srinivasa Acarya prabhu remained behind to recover the books while Narottama continued on towards Kheturi and Shyamananda proceeded to Ambika Kalna. Arriving there, Syamananda paid his obeisances to his guru, and Sri Hrday Caitanya Prabhu embraced him and inquired about the well being of the gosvamis of Vrindavana.
Syamananda served the lotus feet of his guru in great happiness and in this way passed his days. At this time most of the devotees of Lord Caitanya in Orissa had all left the planet. Thus the preaching of Mahaprabhu’s teachings had all but come to a halt. Hrdaya Caitanya Prabhu considered this a very serious problem and finally instructed Syamananda Prabhu to go there to carry on the preaching of Mahaprabhu’s mission.
Syamananda set out for Orissa. After entering Orissa he first went to his birth place at Dharenda Bahadurpur. From there he came to Dandeshwar, where his father, Sri Krishna Mandal, had previously resided. By the auspicious arrival of Syamananda Prabhu in Utkala the teachings of Mahaprabhu revived. On the banks of the Suvarna Rekha River lived one pious and devoted landholder by the name Sri Acyuta deva. His only son was called Rasik. From his very childhood Rasik was very devoted to Lord Krishna. As he gradually attained the appropriate, age his father engaged some panditas to see to his education. However he didn’t have much regard for material knowledge. He had already ascertained that the greatest goal in life is devotion to Lord Hari. Rasik became anxious to take shelter at the lotus feet of a bonafide spiritual master. One day as he was sitting alone, contemplating on this subject, when he heard a divine voice: “Rasik! Don’t be in anxiety anymore. Very soon a very great personality of the name Syamananda will arrive here. Just take shelter of his lotus feet.”
Hearing this, Rasika was encouraged and took to continuously waiting and watching for the arrival of Prabhu Syamananda. After a few days Shyamananda prabhu, accompanied by his disciples, came to the village of Rohini. Syamananda prabhu initiated Rasika. Many people of Rohini also became disciples of Syamananda prabhu.
From here Sri Syamananda Prabhu went to Sri Nrsimhapur, where many atheists lived. But when Syamananda stayed a few days, these atheists got the chance to hear his necterian talks, which melted their hard hearts in love for Krishna. Thus, in this place also, he gained many disciples.

Day by day the glories of Syamananda spread throughout Utkaladesa. From Nrsimhapur he came to Gopiballabhpur. Here again, many well to do people were attracted to his lotus feet and so took shelter there. The people here especially requested him to install the Sri Vigraha of Radha-Krishna. Thus, a temple for the deity was constructed. The greatness of Syamananda became known throughout all of Orissa and the worship of Sri Gaura-Nityananda was inaugurated in many, many places.  Shyamananda’s disciples have established five principle seats in the towns of Dharenda, Bahadurapura, Rayani, Gopiballabhapura, and Nrisinghap.http://www.radhagopinath.com/latest-radhagopinath-articles/radha-gopinath-news/sri-shyamananda-prabhu-disappearance

After the disappearance of Srimati Vishnupriya Devi, he worshiped her deities in Navadvipa.
(Pictured at right is the deity worshiped by Vishnupriya Devi and later Vamsivadana Thakura.)
vamshi krishna-priya yasit sa vamshi-dasa-thakkurah
Vamshivadanananda Thakur was Krishna’s flute in Vraja.
(Gaura-ganoddesha-dipika 179)
The gopis praised the good fortune of Krishna’s flute, for he was able to constantly drink the nectar of Krishna’s lips. Everything in Vraja is spiritual, i.e., conscious, and so the flute could take human form as Sri Vamshivadanananda Thakur. His life story has been recounted by his grandson, Shrivallabha Das, in the book Vamshi-vilasa. Other books which contain details of his life are Shripata-paryatana and Bhakti- ratnakara, and the Gaudiya Vaishnava Abhidhana also gives a brief biography.
Vamshivadanananda Thakur was known by five names in Gaudiya Vaishnava society: Vamshivadana, Vamshidas, Vamshi, Vadana, and Vadanananda. He was a well-known writer of devotional songs. His appearance took place on the day of the spring full moon (in the month of Chaitra) in either 1416 (according to Vamshi-shiksha) or 1427 of the Shaka era (1495 or 1506 AD.).