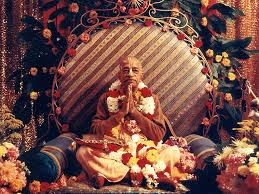 Dipavali [Diwali} Thursday,  October 28, 2019 [Mayapura, West Bengal, India time]
compiled by Yasoda nandana dasa
Srila Prabhupada explains the actual meaning of Dipavali celebration of Lord Krsna breaking the pot of yogurt and being bound by Yasodamayi
Srī-śuka uvāca
ekadā gṛha-dāsīṣu
yaśodā nanda-gehinī
karmāntara-niyuktāsu
nirmamantha svayaṁ dadhi
yāni yānīha gītāni
tad-bāla-caritāni ca
dadhi-nirmanthane kāle
smarantī tāny agāyata
SYNONYMS
śrī–śukaḥ uvāca—Śrī Śukadeva Gosvāmī said; ekadā—one day; gṛha–dāsīṣu—when all the maidservants of the household were otherwise engaged; yaśodā—mother Yaśodā; nanda–gehinī—the queen of Nanda Mahārāja; karma–antara—in other household affairs; niyuktāsu—being engaged; nirmamantha—churned; svayam—personally; dadhi—the yogurt; yāni—all such; yāni—such; iha—in this connection; gītāni—songs; tat–bāla–caritāni—in which the activities of her own child were enacted; ca—and; dadhi–nirmanthane—while churning the yogurt; kāle—at that time; smarantī—remembering; tāni—all of them (in the form of songs); agāyata—chanted.
TRANSLATION
Śrī Śukadeva Gosvāmī continued: One day when mother Yaśodā saw that all the maidservants were engaged in other household affairs, she personally began to churn the yogurt. While churning, she remembered the childish activities of Kṛṣṇa, and in her own way she composed songs and enjoyed singing to herself about all those activities.
PURPORT
Śrīla Viśvanātha Cakravartī Ṭhākura, quoting from the Vaiṣṇava-toṣaṇī of Śrīla Sanātana Gosvāmī, says that the incident of Kṛṣṇa’s breaking the pot of yogurt and being bound by mother Yaśodā took place on the Dipavali Day, or Dīpa-mālikā. Even today in India, this festival is generally celebrated very gorgeously in the month of Kārtika by fireworks and lights, especially in Bombay. It is to be understood that among all the cows of Nanda Mahārāja, several of mother Yaśodā’s cows ate only grasses so flavorful that the grasses would automatically flavor the milk. Mother Yaśodā wanted to collect the milk from these cows, make it into yogurt and churn it into butter personally, since she thought that this child Kṛṣṇa was going to the houses of neighborhood gopas and gopīs to steal butter because He did not like the milk and yogurt ordinarily prepared.
While churning the butter, mother Yaśodā was singing about the childhood activities of Kṛṣṇa. It was formerly a custom that if one wanted to remember something constantly, he would transform it into poetry or have this done by a professional poet. It appears that mother Yaśodā did not want to forget Kṛṣṇa’s activities at any time. Therefore she poeticized all of Kṛṣṇa’s childhood activities, such as the killing of Pūtanā, Aghāsura, Śakaṭāsura and Tṛṇāvarta, and while churning the butter, she sang about these activities in poetical form. This should be the practice of persons eager to remain Kṛṣṇa conscious twenty-four hours a day. This incident shows how Kṛṣṇa conscious mother Yaśodā was. To stay in Kṛṣṇa consciousness, we should follow such persons.
Srimad-Bhagavatam : Canto 10: “The Summum Bonum” : SB 10.9: Mother Yasoda Binds Lord Lord Krsna : SB 10.9.1-2 : 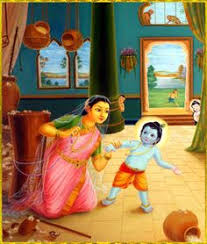 Sri Caitanya Mahaprabhu observed the dipavall festival
ei-mata rāsa-yātrā, āra dīpāvalī
utthāna-dvādaśī-yātrā dekhilā sakali
SYNONYMS
ei–mata—in this way; rāsa–yātrā—rāsa dancing of Lord Kṛṣṇa; āra—and; dīpa–āvalī—a row of lights, the day of Dīpāvalī; utthāna–dvādaśī–yātrā—the festival of Utthāna–dvādaśī; dekhilā sakali—participated in all of them.
TRANSLATION
Śrī Caitanya Mahāprabhu and His devotees participated in all the festivals known as Rāsa–yātrā, Dīpāvalī and Utthāna–dvādaśī.
PURPORT
The Dīpāvalī festival takes place on the dark-moon night in the month of Kārttika (October-November). The Rāsa–yātrā, or rāsa dancing of Kṛṣṇa, takes place on the full-moon night of the same month. Utthāna–dvādaśī takes place the day after Ekādaśī in the waxing fortnight of the moon in the same month. All the devotees of Śrī Caitanya Mahāprabhu participated in all these festivals.
Sri Caitanya-caritamrta – 1975 Edition : Cc. Madhya-lila : Madhya 15: The Lord Accepts Prasada at the House of Sarvabhauma Bhattacarya : Madhya 15.36

The roads, streets and lanes of Hastināpura were all sprinkled with fragrant water through the trunks of intoxicated elephants. In different places of the city there were colorful festoons and flags decorating the houses and streets. At important road crossings there were gates with golden decorations, and at the two sides of the gates there were golden water jugs. These beautiful decorations glorified the opulence of the city. Participating in this great ceremony, all the citizens of the city gathered here and there, dressed in colorful new clothing, decorated with ornaments, flower garlands, and fragrant scents. Each and every house was illuminated by hundreds and thousands of lamps placed in different corners of the cornices, walls, columns, bases and architraves, and from far away the rays of the lamps resembled the festival of Dīpāvalī (a particular festival observed on the New Year’s Day of the Hindu calendar). Within the walls of the houses, fragrant incense was burning, and smoke rose through the windows, making the entire atmosphere very pleasing. On the top of every house flags were flapping, and the gold waterpots kept on the roofs shone very brilliantly.Books : KRSNA, The Supreme Personality of Godhead – 1970 Edition : Volume 2 : KB 2-16 / Lord Krsna in Indraprastha City
Letters : 1967 Correspondence : October : Letter to: Pradyumna — Calcutta 17 October, 1967 : 67-10-17 :
Ramacandra’s victory celebration is observed in the last day of Durga Puja. Vaisnavas are not concerned with Durga Puja. Dipavali or Devali is observed as new years day by certain mercantile community. The Vaisnavas have nothing to do with this ceremony but just on the last day after Devali the Vaisnavas observe Annakuta ceremony. This celebration is the day when Lord Krishna lifted the hill & Madhavendra Puri established the temple in Gopala.
Srila Prabhupada explains the story of celebration of Dipavali: Lord Rama returned to Ayodhya after killing Ravana

DIWALI FESTIVAL: 10th October. 1968,(Letter from Srila Prabhupada to Hamsadutta dasa written from Seattle., Letters book Vol 1. p.549.)
Diwali ceremony can be observed in the temple by illuminating 100’s of candles, indifferent parts of the temple, and offering a special Prasad to the Deity. This ceremony was observed by the inhabitants of Ayodhya, the Kingdom of Lord Ramachandra, while Lord Ramachandra was out of His Kingdom due to His 14 years banishment by the order of His father. His younger step-brother Bharat, took charge of the Kingdom and the day on which Lord Ramachandra took back the charge again from His brother, and seated on the throne, this is observed as Diwali, and Deepabali. Deepabali means the same thing – Deepa means candles, and bali means numerous. When numerous candles are lighted it is called Deepabali. In India, this Deepavali function is celebrated in a special auspicious occassion. This Deepabali function can be observed on 21st October, and Prasad can be distributed on 22nd October, during daytime, which is known as Govardhan Puja and Annakuta Ceremony. In India, in all Vaishnava temples, this ceremony is observed and 100’s of people are given prasadam according to the capacity of the temple.
So I understand that last year the Deepabali ceremony was held in the temple, and there was collection of $130.00. So you can do the needful. Hope you are all well.
Your Ever Well Wisher.A.C.Bhaktivedanta Swami————————- 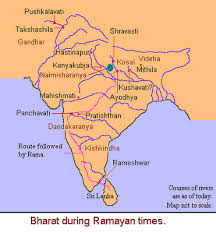