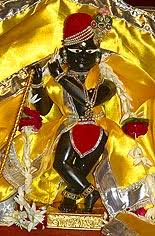 For posting and immediate release
Srila Prabhupada:   Just like Prabodhānanda Sarasvatī did. He said, dante nidhāya tṛṇakaṁ padayor nipatya. The preaching method he is teaching. Prabodhānanda Sarasvatī, he was a great devotee of Lord Caitanya. He wrote one book, Caitanya-candrāmṛta, “The Moonlight of Lord Caitanya,” in Sanskrit. He belonged to southern India. And his nephew became one of the Gosvāmīs. When Lord Caitanya was staying at his home, he was at that time householder. Later on he took sannyāsa and became Prabodhānanda Sarasvatī. At that time Gopāla Bhaṭṭa… Actually, their family title was Bhaṭṭa, Bhaṭṭācārya. Bhaṭṭācārya is given title to the very learned brāhmaṇa. Cakravartī, Bhaṭṭācārya—these are brāhmaṇa’s title who are very learned, very influential. SoBhaṭṭācārya. So at that time Gopāla Bhaṭṭa Gosvāmī was little boy. So Lord Caitanya stayed with this Veṅkaṭa, Veṅkaṭanātha. His name was Veṅkaṭa. Later on he became Prabodhānanda Sarasvatī.
So that boy became influenced and he wanted to go with Lord Caitanya. He was sannyāsī. He was traveling. So CaitanyaMahāprabhu advised him, that “Your father and mother are still living. So you can come to me later on.” He was boy, only sixteen years old. So this boy, Gopāla Bhaṭṭa, he, after the death of his father and mother, he went to Lord Caitanya, and He accepted him. And He handed over in charge of Rūpa Gosvāmī, that “You treat this boy as your younger brother.” And he also became one of the six Gosvāmīs. The six Gosvāmīs… Rūpa Gosvāmī is the, is the head actually. But Sanātana Gosvāmī being his elder brother, he was treating him as his spiritual master. So Rūpa Gosvāmī, Sanātana Gosvāmī, and Gopāla Bhaṭṭa Gosvāmī, and Raghunātha BhaṭṭaGosvāmī, and Raghunātha dāsa Gosvāmī, and Jīva Gosvāmī. These six Gosvāmīs, they have given immense literature. And all of them established one temple in Vṛndāvana. You have seen, Kīrtanānanda Mahārāja, the Rādhā–Ramaṇa temple. Rādhā–Ramaṇatemple, that is Gopāla Bhaṭṭa Gosvāmī’s.Lectures : Srimad-Bhagavatam Lectures : Canto 1: Lectures : SB 1.5: Lectures : Srimad-Bhagavatam 1.5.8-9 — New Vrindaban, May 24, 1969
Srila Prabhupada: This is the surrendering process of the author, Kavirāja Gosvāmī. Before beginning to write Caitanya-caritāmṛta,he submitted himself to the lotus feet of Madana-mohana. (aside:) That child may be… So he is submitting that Rādhā-Madana-mohana… Those who have gone to Vṛndāvana, they have seen the temple of Rādhā-Madana-mohana. That was established by Sanātana Gosvāmī, the first disciple of Lord Caitanya Mahāprabhu. Sanātana Gosvāmī established this Madana-mohana temple, and Rūpa Gosvāmī established that Govindajī’s temple, and the Jīva Gosvāmī established Rādhā-Dāmodara temple. Gopal Bhaṭṭa Gosvāmī established Rādhā-Rāmaṇa temple. In this way, in Vṛndāvana there are seven temples authorizedly established by the Gauḍīya-sampradāya, Caitanya Mahāprabhu’s sampradāya. Later on, many big, big kings and zamindars, landlords, they also established many temples, big, big temples. And altogether, there are five thousand temples in a small city like Vṛndāvana, and thousands of men go to see the Deities in every temple almost every day, and especially during the four months Śravaṇa, Bhādra, Āśvina, Kārttika: July, in July, August, September, October. So Vṛndāvana is always crowded by many pilgrims, and anyone who goes there, immediately he feels spiritual consciousness, especially nowadaysLectures : Sri Caitanya-caritamrta Lectures : Adi-lila: Lectures : Adi 1: Lectures : Sri Caitanya-caritamrta, Adi-lila 1.15 — Dallas, March 4, 1975 : 750304CC.DAL
Srila Prabhupada explains the meaning of Radha-Ramana
Actually God has no name, but according to different calculation or different situation, He has got a name. Just like Kṛṣṇa. Kṛṣṇa is the characteristic of the Supreme Lord. Kṛṣṇa means all-attractive. If God is not all-attractive… Not everyone is all-attractive, but God is all-attractive. Therefore, He is called Kṛṣṇa. God appeared as the son of Vasudeva or Nanda Mahārāja, therefore He is called Yaśodānanda, Nandananda, Vasudevanandana. His relationship. Kṛṣṇa enjoys the company of Śrīmatī Rādhārāṇī, therefore He is called Rādhā-ramaṇa. Rādhā-Govinda. So God’s name is there according to His pastimes, relationships. So Kṛṣṇa is the supreme name because it means all-attractive. Similarly, here it is name, God’s name, Adhokṣaja. Adhokṣaja.Lectures : Srimad-Bhagavatam Lectures : Canto 1: Lectures : SB 1.2: Lectures : Srimad-Bhagavatam 1.2.6 — Hyderabad, November 26, 1972 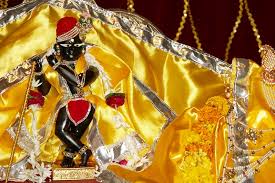 Sri Radha Raman in Vrindavan
Amazing pictures of Sri Sri Radha Ramana abhisekha
.Vyenkata Bhatta invited Lord Chaitanya to stay at his house during Chaturmasya in Sri Rangam. Gopal Bhatta was at that time small boy and got the chance to serve the Lord and hear directly from Him. After some time Lord Chaitanya left on his tour to South India and told Gopal Bhatta to go in the future to Vrindavan…
…Gopal Bhatta became learned in Sanskrit, poetry, rhetoric and all aspects of devotional service. After passing of his parents, he left home and proceeded towards Vrindavan where he joined Rupa and Sanatan…
…After some time studying in Vrindavan Gopal Bhatta made a trip to Nepal. One day when he was taking bath in Kali-Gandakini river, he dipped his kamandalu into the water and 12 silas mysteriously entered his water pot…
…He put them back into the water and dipped the kamandalu again in the water of the holy river, but the silas again entered his water pot…
…When it happened for the third time, Gopal Bhatta realized, that those are not ordinary stones, but they must be some very special ones and there must be some divine arrangement behind it. He kept them in a cloth bag hung around his neck and from that time on he started to worship them and then returned to Vrindavan…
…As previously mentioned, once he intensely desired to decorate his salagram as the other Goswamis could decorated their Deities, then seat Him on a swing and serve Him as other devotees can. “If only He had arms and legs like a Deity,” he thought…
…Lord Krisna, being very kind to His devotees, that very night transformed Himself from one of small salagram-sila into threefold form of Radharaman. If one has darsan of Radharaman’s back, one will see that it resemble salagram-sila. Although the Deity is quite small many devotees find Him to be extremely attractive.