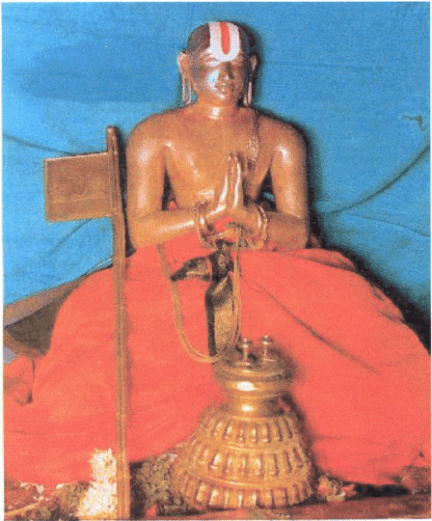 “It has been said that Pradyumna, the mind, was produced from Saṅkarṣaṇa. But if Saṅkarṣaṇa were a living entity, this could not be accepted, because a living entity cannot be the cause of the mind. The Vedic injunctions state that everything-including life, mind and the senses-comes from the Supreme Personality of Godhead. It is impossible for the mind to be produced by a living entity, for the Vedas state that everything comes from the Absolute Truth, the Supreme Lord. “Saṅkarṣaṇa, Pradyumna and Aniruddha have all the potent features of the absolute Personality of Godhead, according to the revealed scriptures, which contain undeniable facts that no one can refute. Therefore these quadruple forms are never to be considered ordinary living beings. Each of Them is a plenary expansion of the Absolute Godhead, and thus each is identical with the Supreme Lord in knowledge, opulence, energy, influence, prowess and potencies. The evidence of Pañcarātra cannot be neglected. Only untrained persons who have not genuinely studied the Pañcarātras think that the Pañcarātras contradict the śrutis regarding the birth or beginning of the living entity. In this connection, we must accept the verdict of Śrīmad-Bhāgavatam, which says: ‘The absolute Personality of Godhead, who is known as Vāsudeva and who is very affectionate toward His surrendered devotees, expands Himself in quadruple forms who are subordinate to Him and at the same time identical with Him in all respects.’ The Pauṣkara-saṁhitā states: ‘The scriptures that recommend that brāhmaṇas worship the quadruple forms of the Supreme Personality of Godhead are called āgamas [authorized works of Vedic literature].’ In all Vaiṣṇava literature it is said that worshiping these quadruple forms is as good as worshiping the Supreme Personality of Godhead Vāsudeva, who in His different expansions, complete in six opulences, can accept offerings from His devotees of the results of their prescribed duties. Worshiping the expansions for pastimes, such as Nṛsiṁha, Rāma, Śeṣa and Kūrma, promotes one to the worship of the Saṅkarṣaṇa quadruple. From that position one is raised to the platform of worshiping Vāsudeva, the Supreme Brahman. In the Pauṣkara-saṁhitā it is said: ‘If one fully worships according to the regulative principles, one can attain the Supreme Personality of Godhead, Vāsudeva.’ It is to be accepted that Saṅkarṣaṇa, Pradyumna and Aniruddha are as good as Lord Vāsudeva, for They all have inconceivable power and can accept transcendental forms like Vāsudeva. Saṅkarṣaṇa, Pradyumna and Aniruddha are never born, but They can manifest Themselves in various incarnations before the eyes of pure devotees. This is the conclusion of all Vedic literature. That the Lord can manifest Himself before His devotees by His inconceivable power is not against the teaching of the Pañcarātra. Since Saṅkarṣaṇa, Pradyumna and Aniruddha are actually the predominating Deities of all living entities, the total mind and the total ego, the descriptions of Saṅkarṣaṇa, Pradyumna and Aniruddha as jīva, mind and ego are never contradictory to the statements of the scriptures. These names identify these Deities, just as the terms ‘sky’ and ‘light’ sometimes identify the Absolute Brahman.

“The scriptures completely deny the birth or production of the living entity. In the Parama-saṁhitā it is described that material nature, which is used for others’ purposes, is factually inert and always subject to transformation. The field of material nature is the arena of the activities of fruitive actors, and since the material field is externally related with the Supreme Personality of Godhead, it is also eternal. In everysaṁhitā, the jīva (living entity) has been accepted as eternal, and in the Pañcarātra the birth of the jīva is completely denied. Anything that is produced must also be annihilated. Therefore if we accept the birth of the living entity, we also have to accept his annihilation. But since the Vedic literature says that the living entity is eternal, one should not think the living being to be produced at a certain time. In the beginning of the Parama-saṁhitā it is definitely stated that the face of material nature is constantly changeable. Therefore ‘beginning,’ ‘annihilation’ and all such terms are applicable only in the material nature.

“Considering all these points, one should understand that Śaṅkarācārya’s statement that Saṅkarṣaṇa is born as ajīva is completely against the Vedic statements. His assertions are completely refuted by the above arguments. In this connection the commentary of Śrīdhara Svāmī on Śrīmad-Bhāgavatam (3.1.34) is very helpful.
“For a detailed refutation of Śaṅkarācārya’s arguments to prove Saṅkarṣaṇa an ordinary living being, one may refer to Śrīmat Sudarśanācārya’s commentary on Śrī-bhāṣya, which is known as the Śruta-prakāśikā
The original quadruple forms Kṛṣṇa, Baladeva, Pradyumna and Aniruddha expand into another quadruple, which is present in the Vaikuṇṭha planets of the spiritual sky. Therefore the quadruple forms in the spiritual sky are the second manifestation of the original quadruple in Dvārakā. As explained above, Vāsudeva, Saṅkarṣaṇa, Pradyumna and Aniruddha are all changeless, transcendental plenary expansions of the Supreme Lord who have no relation to the material modes. The Saṅkarṣaṇa form in the second quadruple is not only a representation of Balarāma but also the original cause of the Causal Ocean, where Kāraṇodakaśāyī Viṣṇu lies asleep, breathing out the seeds of innumerable universes.
In the spiritual sky there is a spiritual creative energy technically called śuddha-sattva, which is a pure spiritual energy that sustains all the Vaikuṇṭha planets with the full opulences of knowledge, wealth, prowess, etc. All these actions of śuddha-sattva display the potencies of Mahā-saṅkarṣaṇa, who is the ultimate reservoir of all individual living entities who are suffering in the material world. When the cosmic creation is annihilated, the living entities, who are indestructible by nature, rest in the body of Mahā-saṅkarṣaṇa. Saṅkarṣaṇa is therefore sometimes called the total jīva. As spiritual sparks, the living entities have the tendency to be inactive in the association of material energy, just as sparks of a fire have the tendency to be extinguished as soon as they leave the fire. The spiritual nature of the living being can be rekindled, however, in association with the Supreme Being. Because the living being can appear either in matter or in spirit, the jīva is called the marginal potency.
Saṅkarṣaṇa is the origin of Kāraṇa Viṣṇu, who is the original form who creates the universes, and that Saṅkarṣaṇa is but a plenary expansion of Śrī Nityānanda RāmaBooks
: Sri Caitanya-caritamrta – 1975 Edition : Cc. Adi-lila : Adi 5: The Glories of Lord Nityananda Balarama : Adi 5.41 :
The purpose of the discussions in the Upaniṣads and Vedānta-sūtra is to philosophically establish the personal feature of the Absolute Truth. The impersonalists, however, in order to establish their philosophy, accept these discussions in terms of lakṣaṇā-vṛtti, or indirect meanings. Thus instead of being tattva-vāda, or in search of the Absolute Truth, they become Māyāvāda, or illusioned by the material energy. When Śrī Viṣṇusvāmī, one of the four ācaryas of the Vaiṣṇava cult, presented his thesis on the subject matter of śuddhādvaita-vāda, immediately the Māyāvādīs took advantage of this philosophy and tried to establish their advaita-vāda or kevalādvaita-vāda.To defeat this kevalādvaita-vāda, Śrī Rāmānujācārya presented his philosophy as viśiṣṭādvaita-vāda, and Śrī Madhvācārya presented his philosophy of tattva-vāda, both of which are stumbling blocks to the Māyāvādīs because they defeat their philosophy in scrupulous detail. Students of Vedic philosophy know very well how strongly Śrī Rāmānujācārya‘s viśiṣṭādvaita-vāda and Śrī Madhvācārya’s tattva-vāda contest the impersonal Māyāvāda philosophy. Śrī Caitanya Mahāprabhu, however, accepted the direct meaning of the Vedānta philosophy and thus defeated the Māyāvāda philosophy immediately. He opined in this connection that anyone who follows the principles of the Śārīraka-bhāṣya is doomed  Books : Sri Caitanya-caritamrta – 1975 Edition : Cc. Adi-lila : Adi 7: Lord Caitanya in Five Features : Adi 7.110 : PURPORT
This verse indicates that oṁkāra, or praṇava, is a direct representation of the Supreme Personality of Godhead. Therefore if at the time of death one simply remembers oṁkāra, he remembers the Supreme Personality of Godhead and is therefore immediately transferred to the spiritual world. Oṁkāra is the basic principle of all Vedicmantras, for it is a representation of Lord Kṛṣṇa, understanding of whom is the ultimate goal of the Vedas, as stated in the Bhagavad-gītā (vedaiś ca sarvair aham eva vedyaḥ). Māyāvādī philosophers cannot understand these simple facts explained in the Bhagavad-gītā, and yet they are very proud of being Vedāntīs. Sometimes, therefore, we refer to the Vedāntī philosophers as Vidantīs, those who have no teeth (vi means “without,” and dantīmeans “possessing teeth”). The statements of the Śaṅkara philosophy, which are the teeth of the Māyāvādī philosopher, are always broken by the strong arguments of Vaiṣṇava philosophers such as the great ācāryas,especially Rāmānujācārya. Śrīpāda Rāmānujācārya and Madhvācārya break the teeth of the Māyāvādī philosophers, who can therefore be called Vidantīs, “toothless.
“Books : Sri Caitanya-caritamrta – 1975 Edition : Cc. Adi-lila : Adi 7: Lord Caitanya in Five Features : Adi 7.128 : TRANSLATION

from  http://saranagathi.org/acharyas/ramanuja/articles/life.php
by Sri Anbil Ramaswamy
Sri Ramanuja (1017 – 1137 CE), the most important philosopher-saint of Sri Vaishnavam and one of the most dynamic characters of Hinduism. He was a philosophical as well as a social reformer, displaying a catholicity that was nearly unparalleled in Hindu religious history before him. He revitalized Indian philosophy and popular religion so much that nearly every aspect of Hinduism has been influenced by his work. His life and works show a truly unique personality, combining contemplative insight, logical acumen, catholicity, charismatic energy, and selfless dedication to God.
The less known fact even among Srivaishnavas about this well known Acharya by whose name Srivaishnava philosophy is called ‘Ramanuja Darsanam’ and who is hailed as “Sri Vaishnava Siddhanta Nirdhaarana Saarva bouma” is that he was a ‘Vadama’ by birth.(Authority :” Periya Thrumudi Adaivu, Pazhanadai Vilakkam and Visishtaadvaita Catechism” – quoted in GLE
HIS AVATARA AND EARLY DAYS
Ilaya Perumal was born to Kesava Perumal Somayaji Dikhsitar and Kanthimathi Ammal at Sriperumpudur. Just as Sage Vasishta on seeing the brilliance in the face of the child named him as Lakshmana saying “Lakshmano Lakshmi Sampannaha”, Periya Thiru malai Nambi struck by the Tejas of the child, named him after Lakshmana as Ilaya Perumal. (PPM) aka Ilayalwar.
There is a sloka in Yadhavaachala Mahatmyam which says:
Ananthah Prathamam Roopam Lakshmanascha Tathah Parah |
Balabadram Thritheeyasthu Kalou Kaschit Bhavishyathi ||
(meaning) It is the same who was Adhisesha first, Lakshmana after and Balarama in the third who is born as Sri Ramanuja in the Kali yuga. This Kaschit is taken by our Poorva Acharyas as referring to Ramanuja (PPM)

His physical body is preserved even today in a sitting posture in the Sannidhi (Sanctum Sanctorum) dedicated to him on the southwest corner on the fifth round within the Srirangam temple as ordered by Lord Ranganatha himself.
The whole world is aghast at the feat of preservation of the mummies of Egypt and the body of St. .Xavier in Goa in India and make so much fuss about them.
Even some Srivaishnavas are not aware that here in Srirangam. their holiest place hailed as ‘ Bhuloka Vaikuntam’ ( Heaven on Earth) lies preserved the body of Sri Ramanuja in all its pristine state unostentatiously, without any fanfare or publicity and without using any of the chemical preservatives employed by the Egyptian and Goan models.
Swami Desika in Sloka 10 of his Yathiraja Saptadhi pays obeisance to Bhagavad Ramanuja thus before proceeding with his eulogy.
Pranaamam Lakshmana Munih Prathi Grihnaathu Maamakam |
Prasaadhayathi yat Sookthih Svadheena Pathikaam Sruthim ||
(meaning) I beseech Sri Ramanuja whose Srisookthis claimed the acclaim of the Lord and adorned the Upanishads to kindly accept my Pranams. There is another famous Sloka which says :-
Thasmai Ramaanujaaryaaya Namah Parama Yoginae |
Yah Sruthi Smrithi Sutraanaam Antharjvaramaso Samathaa ||
(meaning) I bow to that Sri Ramanuja, the great Yogi who became the very soul of Vedas, Upanishads and other Sutras.